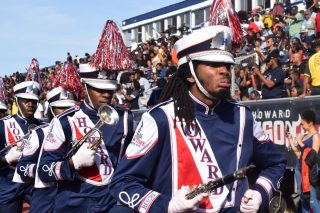 After an eventful week, Howard University wraps up the homecoming activities with the annual Homecoming Parade.

Howard University’s annual homecoming parade took place this past Saturday before the football game. This parade is open to the public and celebrates the surrounding Howard community by having local organizations and schools participate along with different organizations on Howard’s campus. WHUR parade host Taylor Thomas stated, “it’s all about giving back to the community.”

The parade began on Georgia Ave. with the Metropolitan and Howard University Police leading the promenade. After the police was Howard’s very own Showtime Marching Band with band alumni participating in the rear. Next, our Baby Bison, students at HU Elementary, threw candy out into the crowd. Then, the Top-Flight Corvette Club rolled up in a variety of corvette car designs. Our HUSA executives and HUSA Senate followed in style

riding in corvettes of their own!

The Ballou High School Band followed our student government orchestrating in Howard University’s Royal Court led by Mr. & Miss Howard University. Next up was the Columbia Heights Band which ensured that everyone was having a “Lovely Day” as it played that classic song by Bill Withers. The Tort Mafia Auto Club followed then came the Residents Life Court and Howard University’s Alumni Association (HUAA).

The parade also included numerous other groups that are important to highlight. Some of these groups were the HU’s Office of the Dean of the Chapel, the Plainfield High School Band from Plainfield, New Jersey, Kamala for the People representing HU Alum Kamala Harris’ campaign for U.S President, and the Duke Ellington School of the Arts which amazed the crowd with its medley of songs. WHBC joined station WHUR to pass out candy.

As in past years, this year’s HU Homecoming Parade was a wonderful way to bring people together and celebrate the great things people are doing in the community. Terez Haynes, a HU alumnus from the 80s stated, “I always come to celebrate.” And celebrate we did! We celebrated the community, Howard, and showed a lot of Bison Pride.