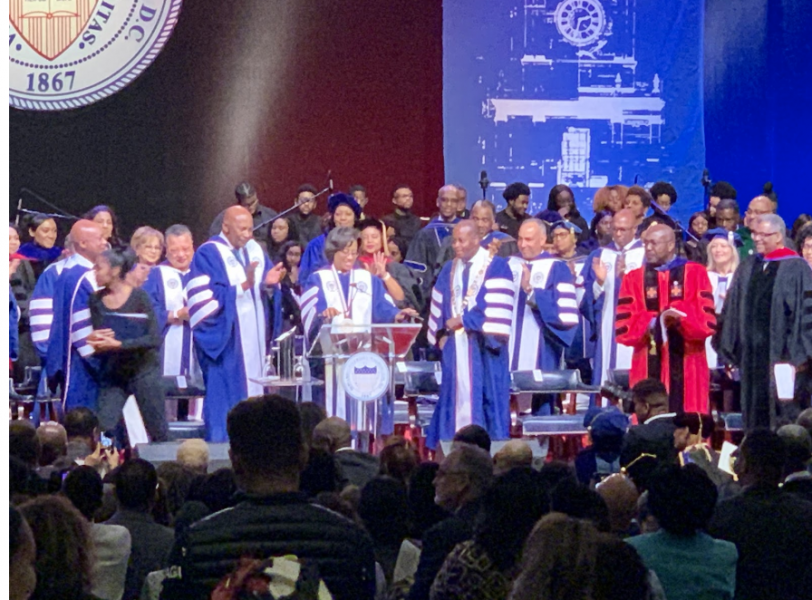 Every year on the 2nd of March, we celebrate Mother’s Day at the Mecca, the birthday of the Real HU, or to most, the Charter Day of Howard University. For 153 years, Howard University has been a staple in the African American community and the collegiate world. In celebration of the occasion, Howard University suspends classes from 10 to 1 pm so students can hear the Convocation message from a speaker. This year, that speaker is Leslie Hale.

This year’s convocation opened with the processional of the faculty and staff of the various schools and colleges at HU. Following, was the presentation of the colors by Howard University’s ROTC and the choir lead both the national anthem and the black national anthem. The Dean of the Chapel then gave an opening invocation to the crowd. President Wayne Fredrick gave the opening remakers which highlighted the fallen alumni we lost since the last charter day. Continuing President Fredrick commented on Women’s History Month and African American women, in particular, stating, “Without their dedication, we would not be where we are today.” Concluding, President Fredrick discussed Howard Forward, the plan to upgrade Howard University from 2019-2024. The chair of the Board of Trustees, Stacey J. Mobley, was next giving warm greets saying, “The future of the world is in this room,” when talking about Howard University’s students. President Frederick then returned to the stage to note those who were receiving Post Grad Achievement Awards. The honorees were Dr. Dereje Agnafer for engineering, Stanley R. Verrett for journalism, and Tanya M. Walton Pratt for law and public service. These individuals would be officially honored at the Charter Day Dinner. Then, it was then time for the anticipated Convocation address.

Ms. Hale began her address by acknowledging numerous guests she had attending and stressing how important giving this speech was to her stating, “there are no words to adequately describe how much this moment means to me today.” She went on to discuss her journey at the Mecca and the role Howard has played in her life, “I wonder if the founders of this great university fully recognized the power of what they were ushering in 153 years ago.” Additionally, she described how important the charter of Howard and that it goes beyond a document, and how the establishment of Howard Unversity transformed the perception of African Americans through numerous outlets. She went on saying, “it announced an undiscovered richness and an untapped potential in black America.”

The alumna then described how the numerous generations of Howard University have made Howard University the university that it is today both literally and fugitively.  Hale then asked the audience to reflect on what the world would be like without Howard University. She listed many alumni who have made an impact on America including Thurgood Marshall, Charles Drew, Toni Morrison, and Kamala Harris, adding “without Howard, our nation and our world story would not be the same. Not as rich, not as complete, not as fulfilled.” Hale then raised the question if the charter document should be held as important as documents like the Declaration of Independence. She continued to sing praises of her alma mater explaining, “As Howard was producing leaders who profoundly impacted America, it also taught African Americans to think differently about our talents, our values, and our place within the great American narrative.”

As she began to conclude, Ms. Hale described how she learned many things in her home state California, but she yearned for a different world outside of Los Angeles in college. She then described her first trip to HU. “As I walked in front of the Quad, the architecture around me made me feel like I was somewhere unique. You could feel the legacy in the air.” Continuing she discussed more of her journey at Howard explaining, “Howard nurtures, Howard educates and Howard polishes, and when you’re ready, Howard propels you.” Hale concluded by emphasizing how Howard University influences its students to strive for greatness including herself saying, “Look into the lens of possibilities, begin to see yourself differently, began to see yourself differently, feel Howard preparing to propel you, and let this revolutionary place begin to spark a revolution in you.”
Leslie Hale’s message left many individuals in attendance inspired and reflecting on the importance Howard University has in their lives. Freshman Lauren Rollerson stated, “for my first Charter Day Convocation this message left me very inspired and excited for the rest of my journey at Howard University.” Following Charter Day Convocation is the highly anticipated Charter Day Dinner Saturday night. This annual black-tie gala is Howard’s premier fundraising event. The 2020 proceeds will support the Student Aid Campaign and its efforts to directly address the gaps that exist in financial aid for Howard students.