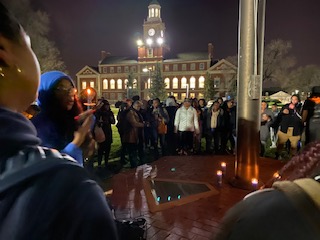 Members of the Howard community gathered at the university’s flagpole on The Yard with candles and speakers. The vigil began at 7:30 pm with a brief prayer given by a leader of NYUnlimited. The night was declared a night of love and passion, following the legacy of the “Welcome To The Party” rapper. Everyone was asked to give a moment of silence. Then, the floor opened for words from the vigil attendees. Many spoke of his talent and drive, including a Howard student who grew up with Pop Smoke. The vigil finished out as a celebration of Pop Smoke’s life, his passionate energy, and his vibrant up-and-coming career.

Pop Smoke was killed early Wednesday morning in a home invasion at his Los Angeles home. The motive for the killing is still undetermined, and the home invaders have not been caught. His death evoked reactions from hip hop lovers everywhere commenting on how young the rapper was in his life and career. The 20-year-old rapper recently released his second mixtape, Meet The Woo 2, which debuted at No. 7 on the Billboard Top 200. The rapper’s legacy will continue on as music lovers continue the party Pop Smoke began.